On April 19, 1861, Confederate sympathizers attacked the 6th Massachusetts Infantry Regiment as it changed trains en route to Washington, which the secessionists hoped to isolate. 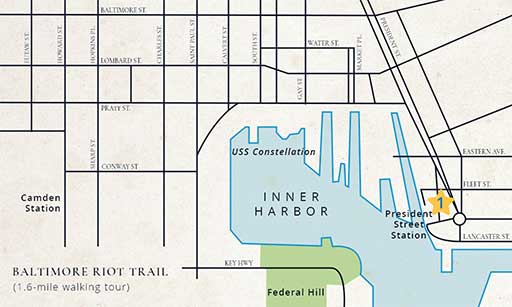 In 1861, as the Civil War began, Baltimore secessionists hoped to stop rail transportation to Washington and isolate the national capital. On April 19, the 6th Massachusetts Regiment arrived here at the Philadelphia, Wilmington and Baltimore Railroad’s President Street Station at 10 a.m., en route with other troops to Washington to answer President Abraham Lincoln’s call for 75,000 volunteers to counter the “rebellion.” Because of anti-Unionist demonstrations the day before, the 720 soldiers were ordered to load their weapons while horses pulled their cars to the Baltimore and Ohio Railroad’s Camden Station (locomotives were banned from the city streets).

Regimental commander Col. Edward Jones led the first of seven cars to Pratt Street and safely across the waterfront. The eighth car turned back after Southern sympathizers blocked the rails. From Camden Station, Jones sent orders to Capt. Albert S. Follansbee, commanding the remaining four companies here: “You will march to this place as quick as possible [and] follow the rail-road track.”

The Lowell City Regimental Band, baggage, and supply cars remained here after Follansbee left, awaiting their own instructions. When a pro-Confederate mob threw bricks at the musicians, they tore the stripes from their uniform trousers to be less recognizable as soldiers and fled on foot into the city.

Capt. Albert S. Follansbee quickly ran into trouble as he led four companies of the 6th Massachusetts Infantry Regiment to Camden Station by President and Pratt Streets on April 19, 1861. Although part of the regiment had reached the terminal with little opposition, a large pro-Confederate crowd gathered at President Street Station and waved a large Palmetto flag — a secession symbol — to taunt the remaining soldiers. Follansbee had received orders to proceed to Camden Station on foot.

As the 240 Massachusetts men marched up President Street, the mob threw bricks and other objects at them. A few Southern sympathizers strutted at the head of the column, insulting the troops by forcing them to march behind the Palmetto flag. Others, taking up the rear, cheered for Confederate President Jefferson Davis and the Southern Confederacy, and shouted insults at the troops.

As the soldiers reached the corner of Fawn Street here, rocks knocked down and injured two of them. Having endured enough, Lt. Leander Lynde stepped from the ranks, seized the Palmetto banner, and tore it from its staff. He then coolly tucked it under his coat and rejoined his company. The only help for the beleaguered soldiers came in the form of a lone Baltimore policeman standing here. He demonstrated extraordinary courage by agreeing to help Follansbee’s men reach Camden Station, more than a mile away.

Near the bridge here, however, an anchor and other objects on the tracks at Pratt and President Streets derailed the seventh car carrying Maj. Benjamin Watson’s company. Watson commandeered a passing team of horses and got the car back on the tracks, but a pro-Confederate mob attacked with stones and bricks, shattering windows and sending glass flying through the car.

The frightened driver quickly unhitched his horses and tried to blend into the crowd, but Watson brought him back at gunpoint to reattach the team and pull the car to safety as the soldiers lay on the floor. Watson ordered them to “ignore the assault and to lie still as they were not being fired upon.” After one of his men called out that his finger had been shot off, however, Watson ordered them to “rise up from the car floor and return fire.”

Back at President Street Station, Follansbee received orders to march his companies to Camden Station. Harassed by the mob along the way, the men reached the Jones Falls Bridge to find a barricade, including a cannon, blocking their path here. Had the gun been loaded, it might have raked the streets with deadly effect, but the soldiers simply climbed over the obstructions and continued their march.

As George Wilson Booth, a state militiaman who joined the rioters, later wrote:

"A soldier, struck by a stone, fell almost at my feet, and as he fell, dropped his musket, which was immediately seized by Edward W. Beatty a port customs officer, who raised it to his shoulder and fired the first shot into the column. As he fired he turned to the crowd and asked if anyone had a cartridge. I gave him one or two and showed him how to reload then betook myself to the protection of the first doorway thus escaping the bullets that were sweeping the street. The rear files faced about and delivered a volley into the crowd, who responded with pistol shots, stones, clubs, and other missiles. A perfect fusilade for the next few blocks was kept up between the troops and the outraged mob."

Francis Xavier Ward was wounded as he tried to seize the regimental flag from Sgt. Timothy Crowley. Later, James Ryder Randall, a Marylander teaching in Louisiana, expressed his sympathies in the secessionist poem “My Maryland,” the official state song since 1939.

The despot’s heel is on thy shore,

His torch is at thy temple door,

That flecked the streets of Baltimore,

And be the battle queen of yore,

Just to the east, the harassed troops finally opened fire. Here, the violence reached a crescendo. Massachusetts Corp. Sumner H. Needham was struck in the head, fell to the pavement, and died. Earlier, he had told a comrade, “We shall have trouble today, and I shall never get out alive. Promise me, if I fall, that my body will be sent home.” Pvt. Luther C. Ladd was shot and killed, proclaiming “All Hail to the Stars & Stripes” as he collapsed.

The mob shot Addison Whitney dead and beat Charles Taylor to death. The rest of the soldiers marched at the double-quick down Pratt Street, dragging their muskets between their legs and reloading as they ran. Baltimore Mayor George W. Brown learned of the riot and hastened first to Camden Station, where all was calm. Then he heard shots coming from Pratt Street.

He met Follansbee at the head of the marching column near here and told him, “You must defend yourselves.” Brown picked up a dropped musket and brandished it, threatening the mob. Police Marshal George P. Kane and a company of policemen soon arrived to hold the crowd at bay as Kane shouted, “Keep back, men, or I shoot!”

Part of the 6th Massachusetts Infantry Regiment transferring to Camden Station to change trains for Washington reached the terminal safely aboard horse-drawn cars on April 19, 1861. Maj. Benjamin Watson’s Company K disembarked here at Howard Street, however, because a secessionist mob had torn up the track, and marched the final two blocks under a shower of bricks and bullets.

The mob attacked the regiment’s last four companies, as Capt. Albert S. Follansbee marched them along Pratt Street, and killed several soldiers a few blocks east. As the troops reached this point, the mob renewed its assault, incited by a man waving a secessionist banner, and soldiers aboard the waiting train opened fire to protect their comrades.

A final shot came from the train as it departed at 1:30 p.m., killing wealthy merchant Robert W. Davis on the Spring Garden side of Camden Station. Five soldiers had died, and more than thirty-six were wounded. Among civilians, twelve were killed and many more wounded.

Within a month, Union Gen. Benjamin F. Butler had occupied Federal Hill and promised to shell Baltimore if any more trouble occurred. The city remained quiet for the rest of the war.